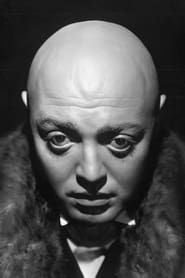 
. Peter Lorre (26 June 1904 – 23 March 1964) was an Austrian-American actor frequently typecast as a sinister foreigner. He caused an international sensation in 1931 with his portrayal of a serial killer who preys on little girls in the German film M. Later he became a popular featured player in Hollywood crime films and mysteries, notably alongside Humphrey Bogart and Sydney Greenstreet, and as the star of the successful Mr. Moto detective series.