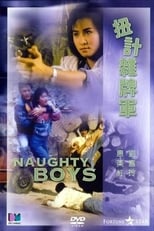 
Frequent Jackie Chan cohort Mars stars as Sing, an ex-con who's supposed to dig up the buried loot of his three still-jailed buddies...but when he gets to it, he finds that the treasure chest is full of rocks! The other three are convinced that Sing stole the goods for himself, so Sing decides to hide out with his kick-butt cousin Kuen, played with athletic aplomb by kung-fu princess Kara Hui! But some insurance investigators (Carina Lau and Billy Lau) are also after the loot, and there's even a mousy travel agent (future director Clarence Fok) thrown in for good measure. It all adds up to numerous shenanigans and action-comedy hijinks, culminating in a knockdown action finale set in a warehouse! Wooden crates, two-by-fours, and more props than you can name are used and abused in the name of creative eighties HK-style action, which Jackie Chan and company are only too glad to dispense to the audience!