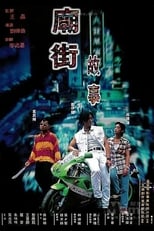 
Miu (Ekin Cheng) grew up on Temple Street, where most of the gangsters in the area gathered, but he never hung around with them. When he accidentally kills a mobster he is imprisoned, and his life is changed forever. Upon his release, everything around him is different. He is now stuck in the sinking pit of the triad influence, and can neither escape from the merciless killings of the underworld, nor run away from the traps of the ordinary world. The only thing in his life that stays the same, is his love Sue. But is that enough to keep him from going over the edge?