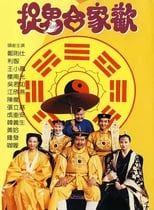 
Kent Cheng plays some sort of ghost hunter who's not had much work lately, with his jealous wife Pauline Wong putting rice on the table by working as a fortune teller, while Kent is toying around with some bizarre inventions such as a "human and corpse linking machine" designed to better control the undead. Their two grown children and their "ghost servant" complete the family, and then there's Nina Li as Kent's "colleague sister" who has an obvious crush on Kent, much to the chagrin of his wife. Then the "copper vampire" enters the picture, a very powerful vampire made even deadlier by the stupidity of some wizards who have it out for Kent. The rest of the movie is pretty much dedicated to the family struggling to overpower the Copper Vampire, so you have lots of spells, pratfalls and chases, intermingled with hilarious comedic asides between the characters (mainly fueled by the jealousy between Pauline and Nina).